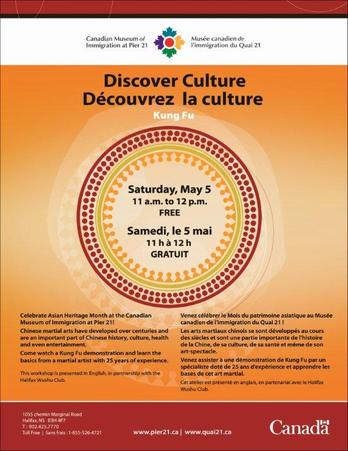 On May 5, 2012, the Halifax Wushu Club was aksed to give a kung fu / wushu demonstration at Pier 21 in Halifax to celebrate Asian Heritage month. 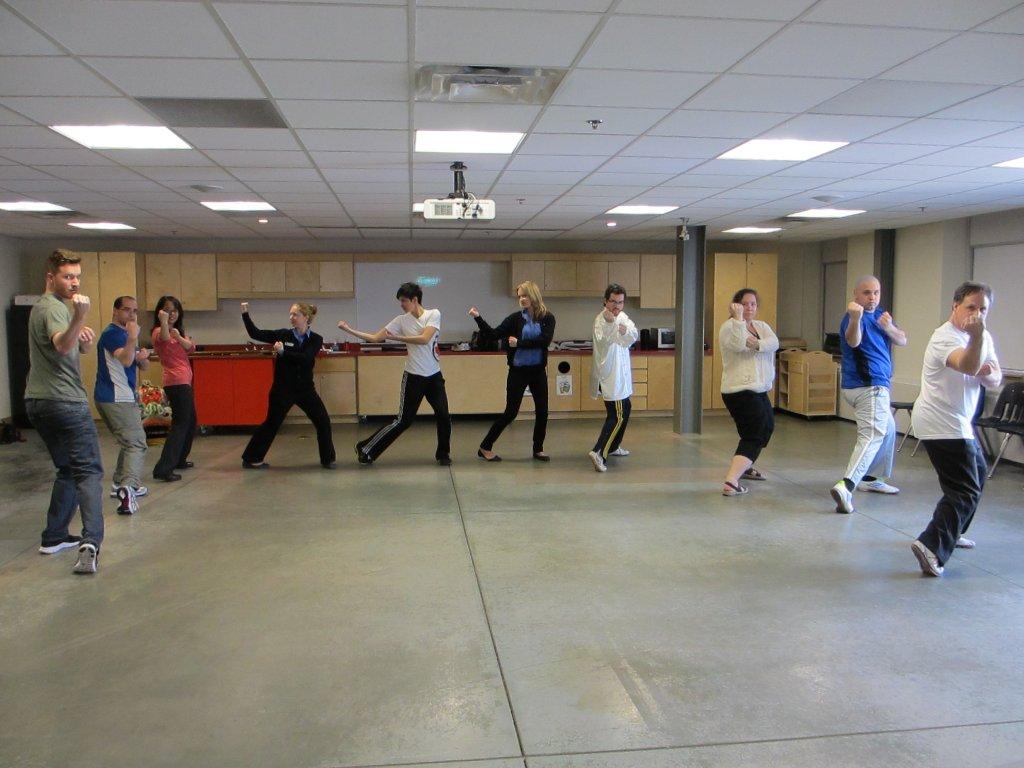 WUSHU A PASSION FOR JOSH ARNOLD
By Joel Jacobson

Through a summer evening fog, Josh Arnold intensely goes through a Wushu workout.
His arms thrust forward, followed by his legs, leaping into a kick. Perspiration forms on his
face as the exercise becomes more and more vigorous. He’s in good shape, probably better
than the other seven participants on this July evening in Halifax, but he still shows the strain
of the exertion.
Josh, a 47-year-old Halifax lawyer, husband, and father of two, is volunteer head of the
Halifax Wushu Club of more than a dozen members. They meet regularly to learn the Chinese
martial art, known to some as Kung Fu, but, as Josh explains, “Wushu means martial arts in
Chinese, whereas Kung Fu means to be really good at something.
In an effort to make his club members better, Josh arranged for Chinese champion and longtime instructor,
Lu Yan, to come to Halifax from Beijing for a week of intense evening
seminars with the Halifax club. In addition, Josh has several personal training sessions.
Lu Yan, with husband Chris Rayner translating, expressed great admiration for Josh. “Even with
his work and family, Josh makes time to organize (the club and this seminar) and teach and
spread the word about Wushu.”
Josh notes he started doing Wushu in 1987 after finishing a university football career at
Acadia University. He was at Dalhousie Law School and tried various sports to replace football,
“rugby, power lifting, other forms of martial arts, but I loved this one. I thoroughly enjoyed
the training, much as I did with football, probably more than playing the games.”
There was a lot of self-practice with Wushu. It was for Josh (and is for everyone) as
physically demanding as one wants to make it. You can practice as hard or easily as you want.
Josh trained with friend Andrew Gordon until 2003 when the latter went to Beijing to train
with the best Wushu teachers in China. When he returned a few months later, he
started the Halifax club.
In the mid-2000s, as a member of the Beth Israel Synagogue, Josh felt he could contribute to
the Jewish community by offering a class in Wushu to anyone in the community. He continues
that program and has generated interest from shul members as well as others outside.
“It’s a demanding form of exercise, drawing together fitness, flexibility and strength, and
even a mental segment because of the complex sequence of motions,” Josh says. “Wushu is
definitely fighting-oriented as you use your hands, feet, shoulders, knees, elbows, whatever is
available.”
Chris Rayner stresses the intent of Wushu, and any martial art, is to avoid conflict before it
happens, but “you have the confidence to use it if necessary.
Chris is a Beijing-based web and program designer for a British company who met Lu Yan when
she was delivering seminars in England. They connected with Andrew when he trained in China
at the same school where Lu Yan, now 47, was teaching.
Lu Yan’s story begins in Communist China 40 years ago when she was recruited, as a sevenyear-old, to attend a phys ed school where Wushu would be her specialty. The children, selected for their size and build which was perceived to be advantageous, long-term, in
Wushu, trained five hours and attended academic classes for three hours daily.
“I really had little choice (to say no to the selection) but my parents realized the opportunity
was remarkable. You just couldn’t turn it down.”
She says the coaches were there to help, not to exert pressure to produce championships.
They wanted their students to be better, to improve.
One of her class members was Jet Li who went on to a major action film career.
Lu Yan smirks when asked if she, too, wanted to be a film star. “I was in a couple of movies
but didn’t like it. Teaching has been my love. I can spread the word of Wushu this way rather
than through films.”
She has been a five-time Chinese champion as an adult and has coached and trained many who
have won national and world championships.
As a coach, she has to adapt to her students’ strengths. In Halifax, she has dealt with people
of different abilities and interests. It’s a matter of recognizing their motivation and working
with them on that.
The training group pauses for a moment, to catch their breath, let the muscles relax a bit,
but they are back it pretty quickly, Josh leading with his encouragement and enthusiasm.